Is what some of my friends wanted to ask, but instead they were very generous, especially when I went on to explain that I came to Broken Hill because I couldn’t go to Libya.

‘Er … ohhhh.’ My friends totally get me.

Among other excursions which are yet to make the blog, I got down to Kinchega National Park to see Menindee Lakes yesterday evening.

The decision to go was last minute, a personal flaw I’m attached to (who doesn’t love winging it? Gosh). The trip there was mostly uneventful, requiring a lot of hard work looking for livestock and/or wildlife. The only time I saw livestock was when I pulled up beside it (photographic mission, obviously). Recently – but no longer – woolly and incredibly placid, a handful of sheep, in the vegetation, right there beside me. And looking at me as if to say, ‘Hey. Great light for it. Check your aperture, won’t you. You want us in the shot? Or over here? Or…?’

Back in the car and further down the road, a couple of roos going away from me, a bunch of emus minding their business and I was feeling pretty good at this point – 110kms in total, all incident-free and now just the lakes to see. I found
the turn-off to the National Park and in I went.

It was here that things got interesting.

It was the most perfect of nights, the light gorgeous. I decided to take the Lakes Drive. Sounded civilised and even though distances weren’t sign-posted, I was thinking, I Am So Close To The Lakes Now, It Will Be Fine, What Could Go Wrong. From the entrance back at the highway it’s all dirt roads, but once you take that Lakes Drive turnoff, things turn a wee bit Leyland Brothers and you’re either cursing over a corrugated strip, or sliding around in soft deep sand. Solid stretches of hard-packed good driving-dirt are like mirages, but that was all fine – nothing like taking a Mitsubishi Lancer into those conditions. Not! If it had any suspension before we went in, we left it in thre, along with the power steering cable and the bit of paint that came of when – but I’ll get to that in a minute.

So I begin to see more and more roos. Not right off, don’t be ridiculous. You don’t see anything un 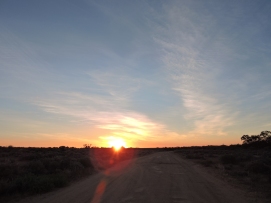 til all of a sudden your heart’s in your mouth and your body is electric with adrenalin. They lie in the vegetation trackside, waiting until your car draws level, then all of a sudden you see something moving, it’s up in the air, it’s higher than the car, bounding away, all a grey streak of movement left and right of me. Kangaroos. Having a great time.

Curse words I’ve never heard before ring in my ears. It was a minute before I could pry my fingers out of the material on the roof of the car and climb back down behind the wheel, probably five minutes more before I could collect myself and drive off.

Head swinging from side-to-side now, sweeping the vegetation on either side as I crawl along at about 10kms an hour, photo-ops sinking slowly in the west – I see a roo bounding off to my right and that’s all it took: I’m distracted watching him jumping for a second and then BANG! on my left, jumping straight into the side of the front of the car – was Karl. What a sad sickening thud he made and in a few freaked-out seconds, so many things went through my head.

Omg, I’ve hit a roo, what if he’s dying, could I help him, they must be so heavy, I’m not going to be able to do IT, what if the chassis is bent/radiator crash

ed in/engine blows up, I’ll have to stay out here overnight with the scorpions – OMG I COULD DIE – someone screaming – I have no idea who: ok, it was me – and I see Karl. While all this was going through my head, Karl has scrambled – he’s embarrassed I swear – to his feet, gives himself a shake and jumps off into the vegetation over to the right of the track. And he’s absolutely FINE.

I drove for another 20 minutes, I think. A bit shaken, even though satisfied Karl was ok and nothing was about to fall off the car, I was worried enough to think about turning around and so after another ten minutes, I did.

I still got some great photos.

And let’s never talk about the trip back, in the black night of a new moon, where all of Karl’s cousins seemed to line the road, nudging each other and poking fun at the ghosting lights of a limping Lancer (‘Kathy! Look! She is

sooo freaked out!’) and never in an easily identifiable pose, either. Ok, a few were easy to spot: standing up straight, their paws crossed in front of them, looking for all the world like they were waiting to cross the road. It was the other ones, bending over, looking at something in the grass beside them and calling to each other across the bitumen. ‘Hey, Kevin! Get a load of this thing in the grass!’ ‘What, Keith? What is it? I can’t see it!’ ‘Come see, Kevin!’

And omg 110kms of that all the way home  – at an average speed of 75km/hour – the strain was almost crippling. Thank god for Pinot Grigio.